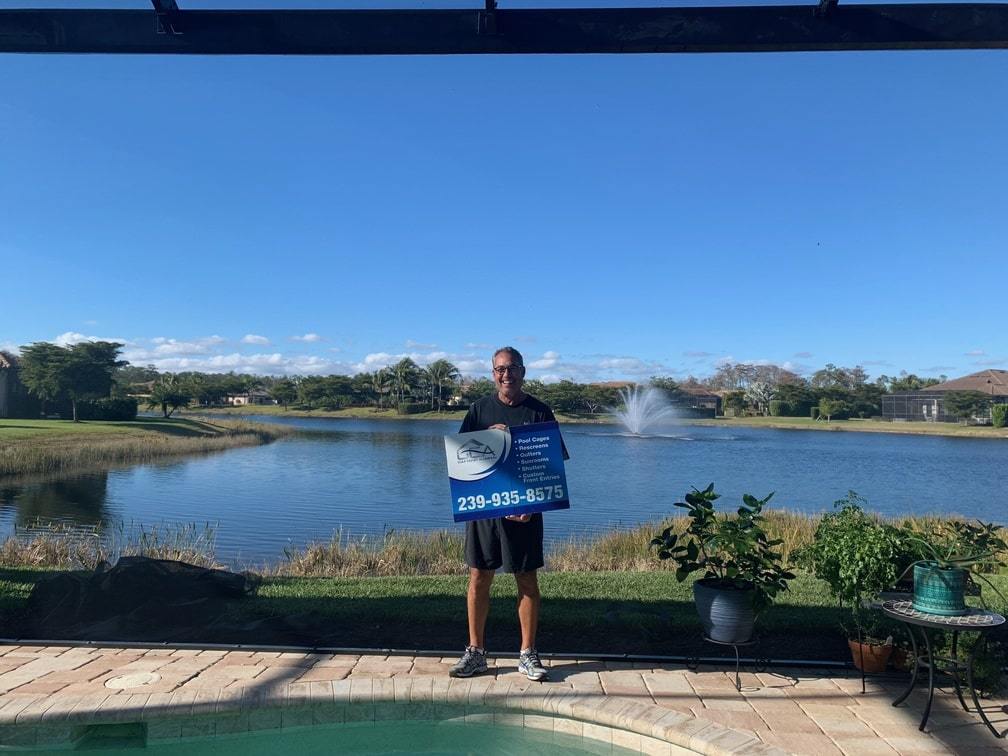 Do you want to get rid of the frames obstructing your view? We can convert existing pool cages into a picture window for the ultimate view. Check out this project we completed in Fort Myers.  To maximize his view, Mr. Gaarder chose our Silver Clearview Conversion, so we re-engineered the entire front wall of his […] 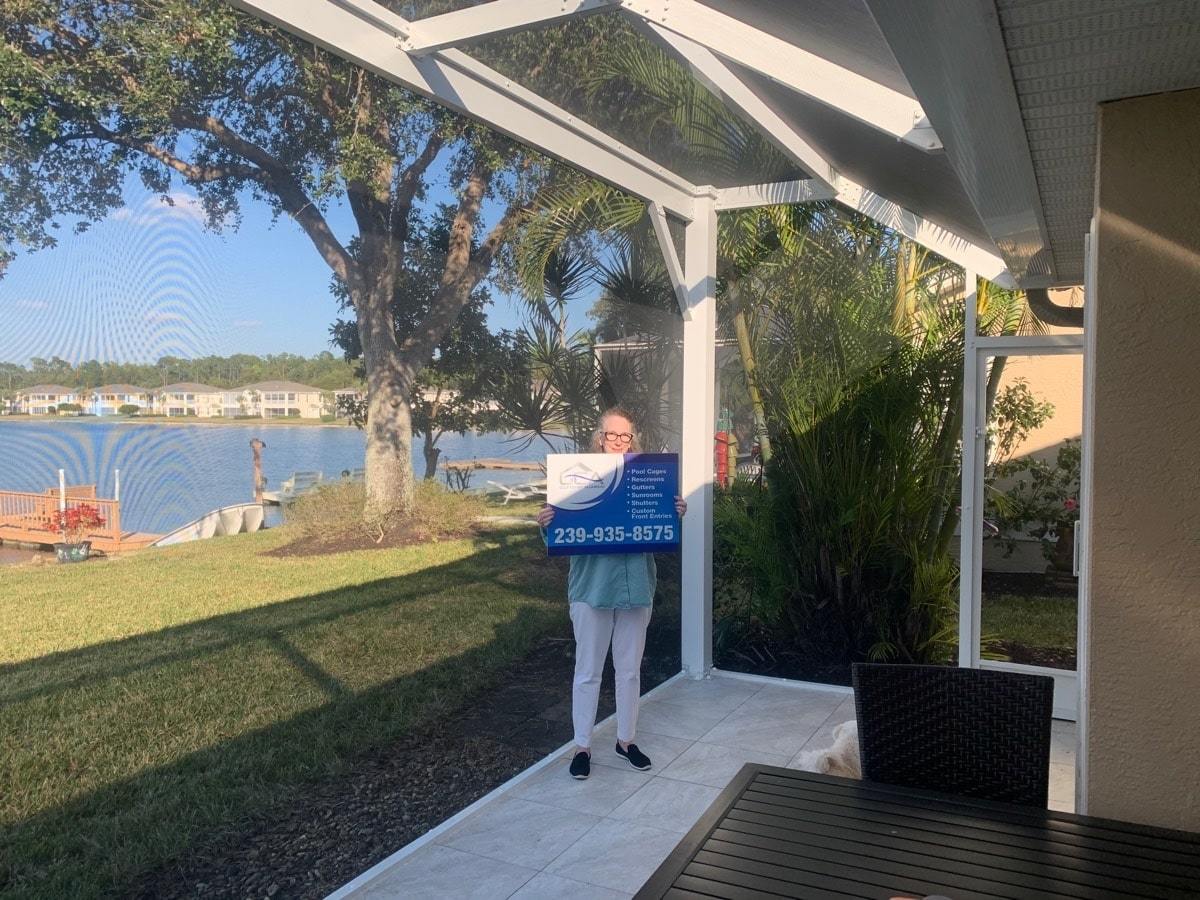 Replacing An Old Enclosure In Naples With A Clearview One

Are there frames blocking your view? Do you want to move the enclosure’s door to a different spot? Check out this project we completed this week! Ms. Jenkins wanted to replace her old enclosure and move the door to the end of the pool cage instead of the front, so we got the job done. […] 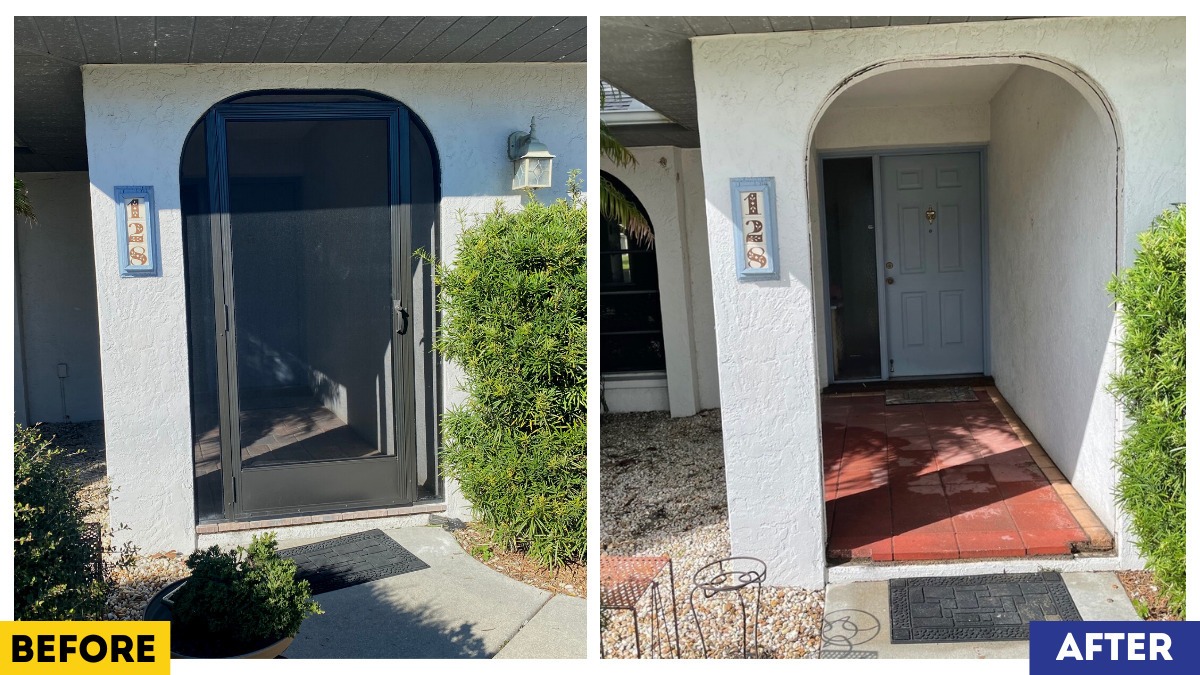 If you get attacked by bugs every time you open the front door, we can screen-in your front entryway, just like what we did for a client in Cape Coral. Ms. Croke wanted to be able to get in and out of her home without worrying about insects getting inside, so she called us to […]

Restoring And Re-Engineering A Pool Cage In Naples

Does your pool enclosure have rusty fasteners, chipped paint, damaged screens, or frames blocking the view? Check out this pool cage we restored for a client in Naples. Mr. and Ms. Jeffries wanted to make their enclosure look brand new again and convert it into a picture window, so they called us to get the […] 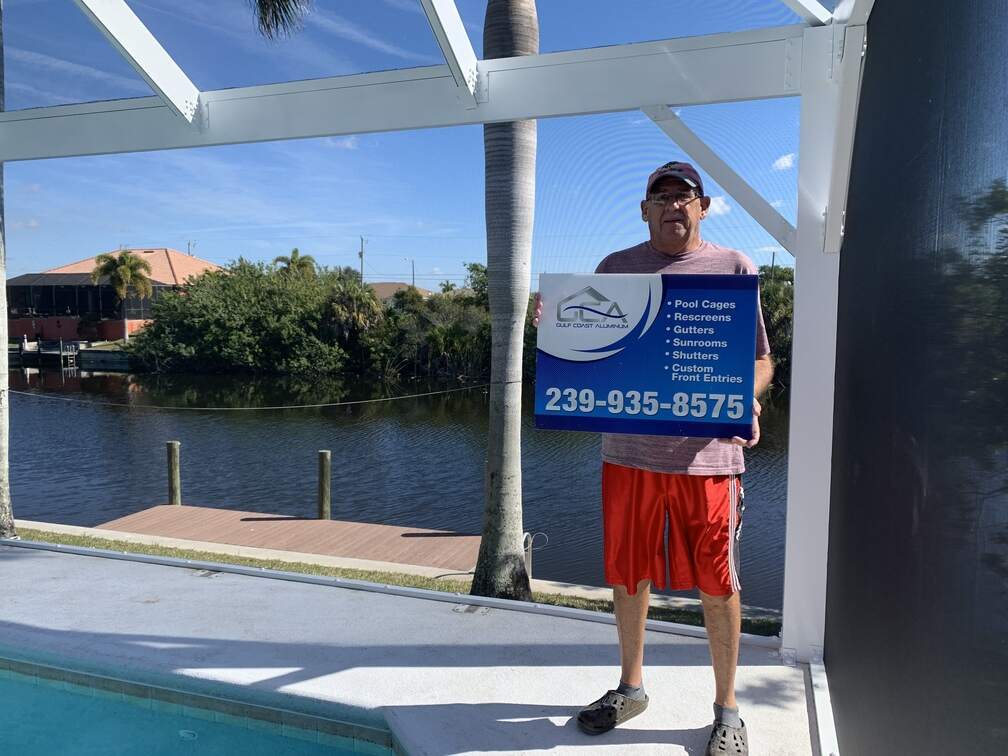 This week, we completed an enclosure restoration and picture window conversion for a client in Cape Coral. After Mr. Rainey saw our projects online, he called us to make his pool cage look brand new again and re-engineer it for the ultimate view. Here’s what his old enclosure looked like. To make it look brand […] 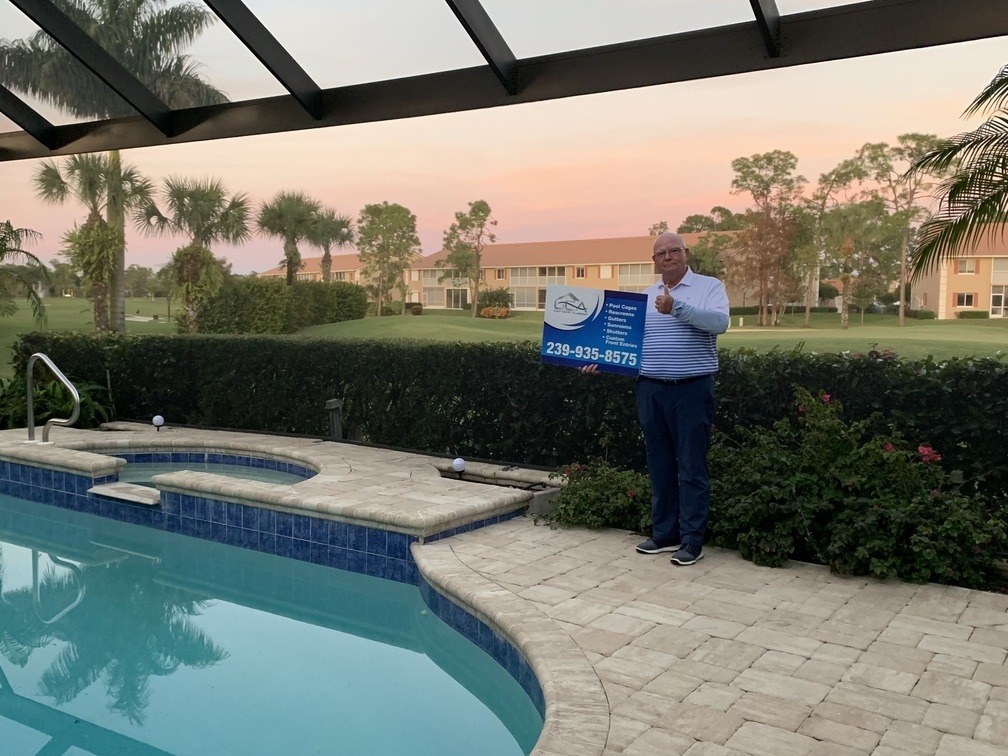 Brand New-Looking Enclosure With The Ultimate View in Naples

This week, we completed a pool cage restoration and picture window conversion project for a client in Naples. Mr. Macdonald wanted to make his enclosure look brand new again, so he called us to get the job done. He availed the Lifetime Restoration Package, which includes re-screening, replacing the fasteners with lifetime warranty stainless steel […]

Prevent bugs from getting inside your home when you open the door by getting your front entryway screened-in. Check out this project we completed for a client in Naples. Mr. Damon wanted to get in and out of his home without getting attacked by bugs, so he called us to screen-in his front entryway. We […] 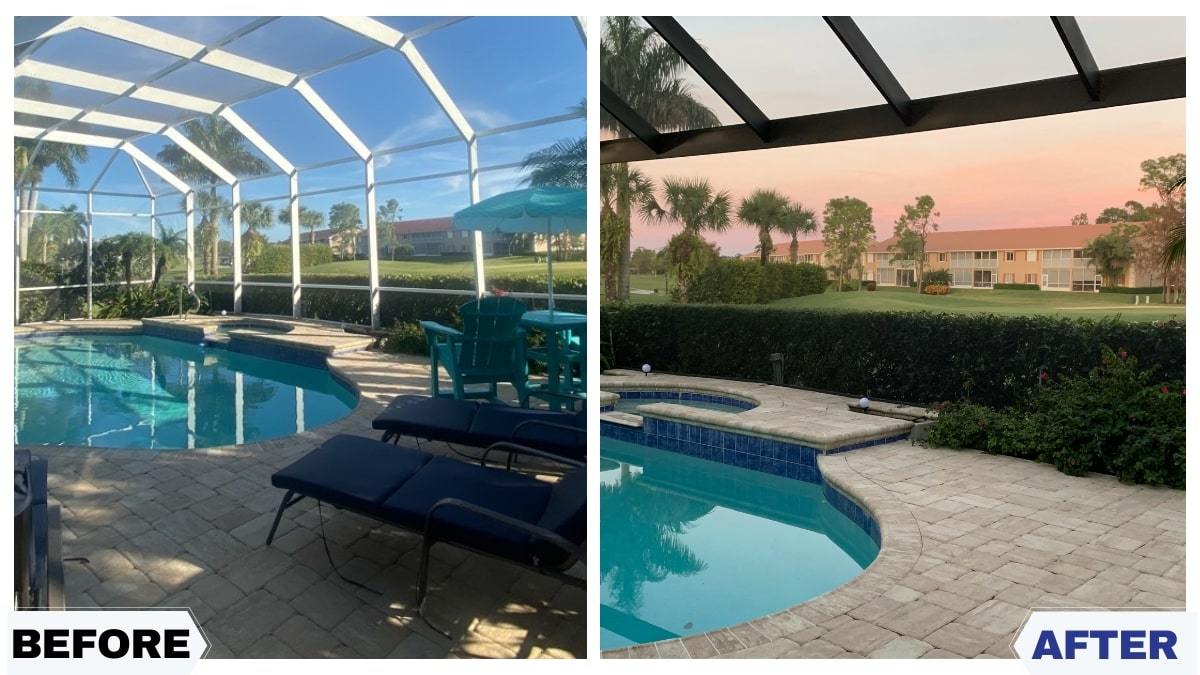 Are there frames blocking the view? We can convert existing pool cages into a picture window for the ultimate view! Take a look at this project we completed for a client in Estero. After Mr. Wright saw our projects online, he called us to make his pool cage look brand new again and get rid […] 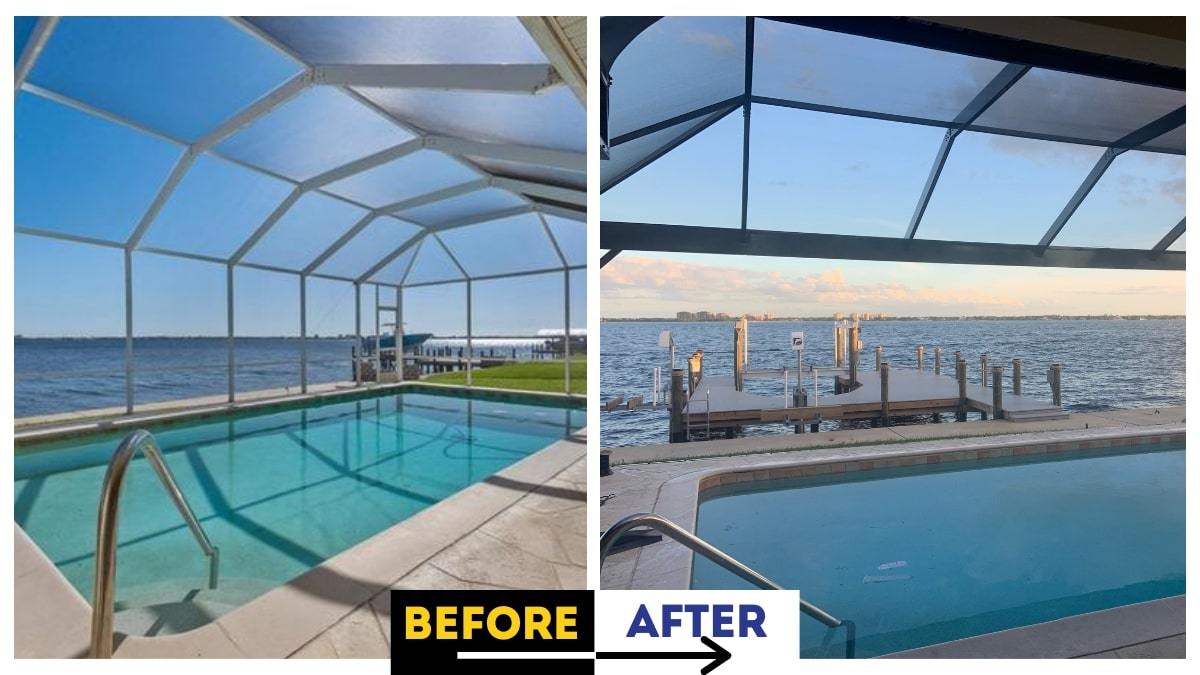 Clearview Enclosure With A Great View in Cape Coral

Check out this enclosure we restored and converted into a picture window for a client in Cape Coral. After seeing our projects online, they called us to make their pool cage look brand new again and get rid of the frames obstructing the view. Here’s what their old pool cage looked liked: It had rusty […] 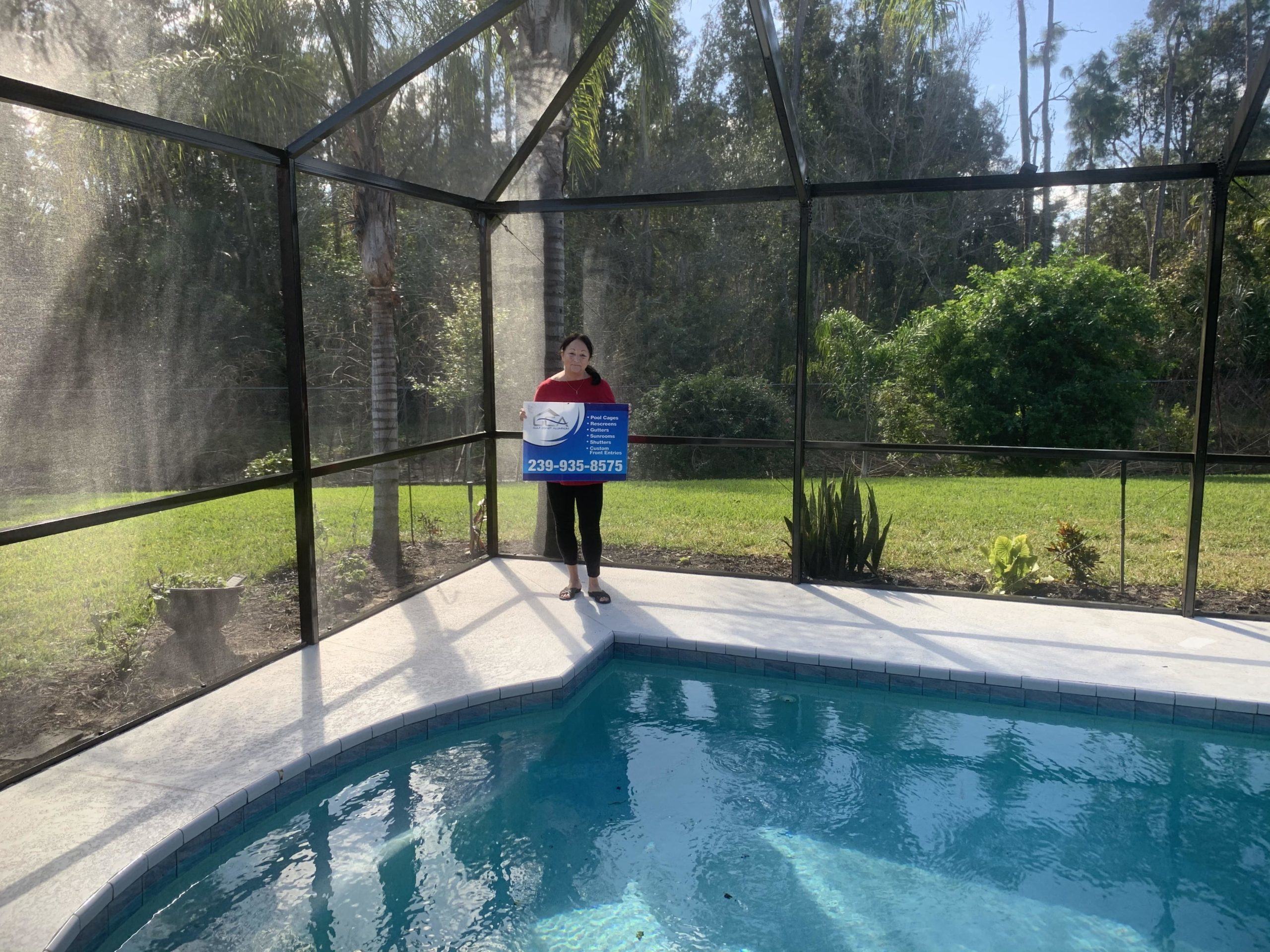 Does your pool cage have moldy frames, rusty fasteners, damaged screens, or has become an eyesore? If yes, then you might want to get it restored, just like this enclosure in Fort Myers. Here is what Ms. King’s old pool cage looked like. To make it look brand new again, she availed of the Lifetime […]